Conscious Music To The World

Learn more about our personalised development and management services for artists.

Learn more about our video production, photography, and online services 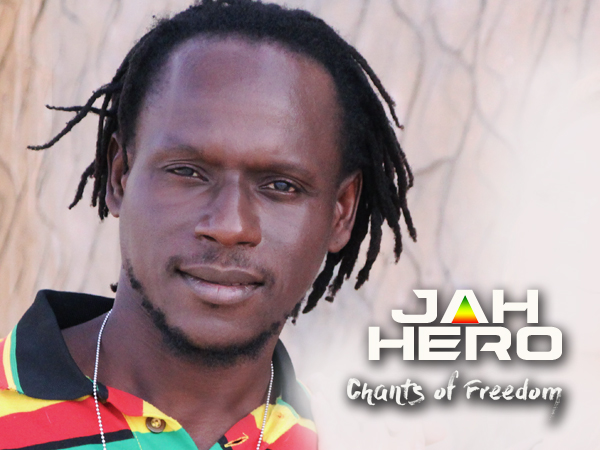 After many years of playing in bands and in collaboration with other musicians, Jah Hero finally released his highly anticipated debut solo album ‘Chants of Freedom’ on the 16th of March 2016. Recorded in Berlin, where the artist now resides, this album is packed with international influences, and describes a courageous journey of a compelling African artist.

With an eclectic mix of Roots Reggae meets World-Beat, this album is definitely a milestone in the Gambian’s music path thus far, and marks a promising beginning to a successful solo career.
The lyrical content is a refreshing balance of political, romantic and Rastafarian views, which makes this album interesting, and meaningful. Although predominately Reggae, one can feel Jah Hero’s African influence throughout the entire album. He has found a brilliant way of incorporating African elements and themes into his well-composed Reggae beats, and has created a significant and unique album that is not to be missed. One track that definitely stands out is the Dancehall song ‘Burn Down Rome’ at the end of the album. Albeit Dancehall, it is not your regular track with lyrics one would expect. On the contrary, Jah Hero shows that he is a truly versatile artist, who can portray his message of unity amongst all, and bring out the African vibes that he is clearly proud of, no matter the genre. Welcome Jah Hero, we salute you for this engaging, and impressive piece of work!

We finally have the first – highly anticipated – confirmed dates for Europe!!!

Come and see Chuck Fenda live, track and band shows, throughout Europe.He has Jah Hero, the voice of Africa, opening up most of his shows [please check back for further updates soon] 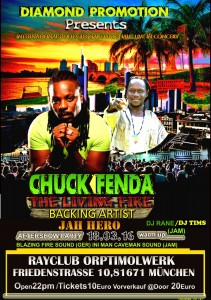 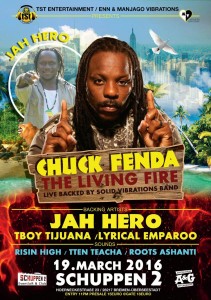 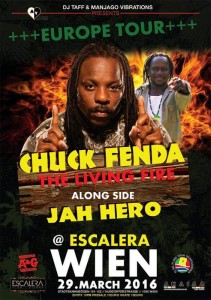 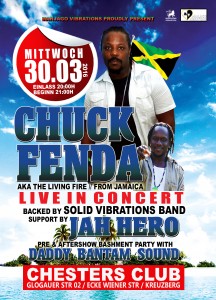 For more information or booking requests please contact us!

2016 will no doubt be Jah Hero’s biggest year so far. The self-taught musician and singer-songwriter just released his debut solo single ‘Rise’, which will also be on the upcoming album. Fans of the upcoming artist have been anticipating the release of his first solo album ever since he moved to Germany, and left his band days in the past. After years of struggling, not only musically, but also with the social issues every African artist deals with at some point in his or her career, Jah Hero seems to have overcoming highest obstacles on his way to the top. He is now finishing up his debut album, studying sound engineering at the SAE in Berlin, and gigs planned all over Europe. During the interview, Jah Hero talks about his new single ‘Rise’ and gives us an acoustic taste of the uplifting tune, you can watch the video here.

Listening to this inspiring song makes us realize the diamond in the rough Jah Hero is, and makes him an artist to watch in 2016 for sure! Here is what the singer told us in an exclusive interview about his latest single,

“I was born and raised in a community where getting a job as an accountant, CEO etc. is regarded as being successful and highly respected. Music has always been part of my life. As a child growing up I   remember, sneaking into clubs where kids were totally not allowed, just for the love of music. When I started high school and the time came when I was to decide what to do with my life, I chose music. Not because I wanted to do something different to the rest of my family, but because of the passion I have for music, and it was really hard for some of my family members to accept that. The song “Rise” is the first song that I wrote in my music career and I wrote it, after so many years of conflict with my family about the choice I made to be an artist. I was seriously shocked to hear what some of them had to say about me being an artist and it’s really hard to be who you want to be in a society where keeping traditional values and trends is highly respected and valued. I love music and that’s what I want to sing, write and compose songs, but ‘I got to be strong to carry on’, and that’s exactly what this song is all about. I want to inspire people who are facing the same condition like me to feel good about who they are, and continue to be who they want to be despite of what society says they should be. That’s my mission, to empower those who feel downgraded or those who still question who they really want to be, with the guidance of the almighty always.”

Go and grab yourself a copy of this massive tune here: http://smarturl.it/jahherorise 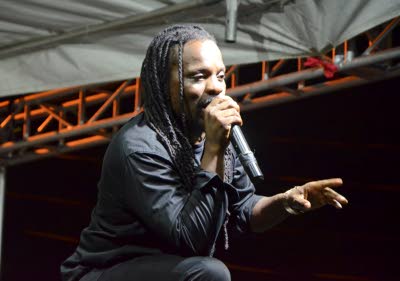 Reggae Legend Chuck Fenda ‘Di Living Fire’ opened the 2015 Galiday Bounce in Jamaica, and delivered a high energy show, just as the fans expected him to! The crowd went maaaadddd!!!!

Here is what the Jamaica Observer wrote about it:

WITH its line-up of major acts and billed as one of the major dancehall events for the Yuletide season, Galiday Bounce lived up to expectations at the Ewarton Sports Complex in St Catherine on Monday night.

Backed by Ruff Kutt band, Chuck Fenda was the first to ignite the venue with songs including Gash Dem, I Swear and Murderer.

Manjago Vibrations is proud to represent conscious music artists, no matter the genre, the message counts! Check out our new website, and take a look at our latest projects….

You can find out more about which cookies we are using or switch them off in settings.

This website uses cookies so that we can provide you with the best user experience possible. Cookie information is stored in your browser and performs functions such as recognising you when you return to our website and helping our team to understand which sections of the website you find most interesting and useful.

You can adjust all of your cookie settings by navigating the tabs on the left hand side.

Strictly Necessary Cookie should be enabled at all times so that we can save your preferences for cookie settings.

If you disable this cookie, we will not be able to save your preferences. This means that every time you visit this website you will need to enable or disable cookies again.